Another year I get the privilege to sew a costume for a friend! 🙌 I seem to only sew costumes for other kids instead of my own. Why? Because they buy all the supplies and watch my children with theirs while I create and it’s a super fun play date (or series of play dates). This pyear Tinkerbell is going to be Cinderella and her little brother needed a Gus Gus costume.

We looked everywhere to buy one but nothing..  not even a brown jump suit or footed pjs to throw stuff together. Not even Amazon or Walmart..  Nada! So we decided a couple weeks before Halloween to just go crazy and start from scratch! Awesome! 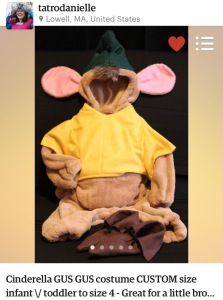 I bought this amazing super easy Plain Romper pattern from Duck Butt Designs. Not as involved as the Panel Pocket Romper pattern I used with their test group. The best part of DBD patterns are their pdfs have layer selection which you can select the size you want to cut out and hide the rest. Therefore, only printing the line and info you need on the pattern. Worth the $5 completely! 👍

I cut out the 2T size romper pieces with an extra front piece for lining to stuff the poly fill.  I cut off the legs and the upper chest of the lining but afterwards realized I should have kept the full piece from top to crotch. 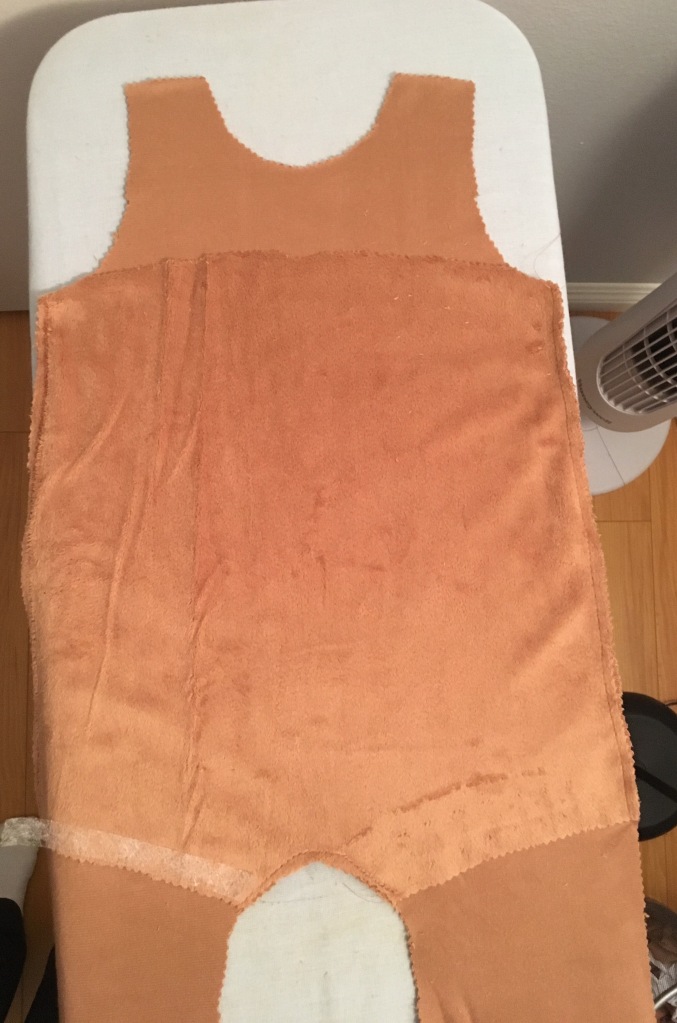 I hand sewed the top portion onto the seams after filling it just to keep the itchy poly fill from touching the soft baby skin. I think having the lining with the fuzzy outward made this costume more inviting for little Gus Gus (less tears for sure!)

I just followed the romper pattern and added the lined hood (another plus for the babes soft head) and red snaps. 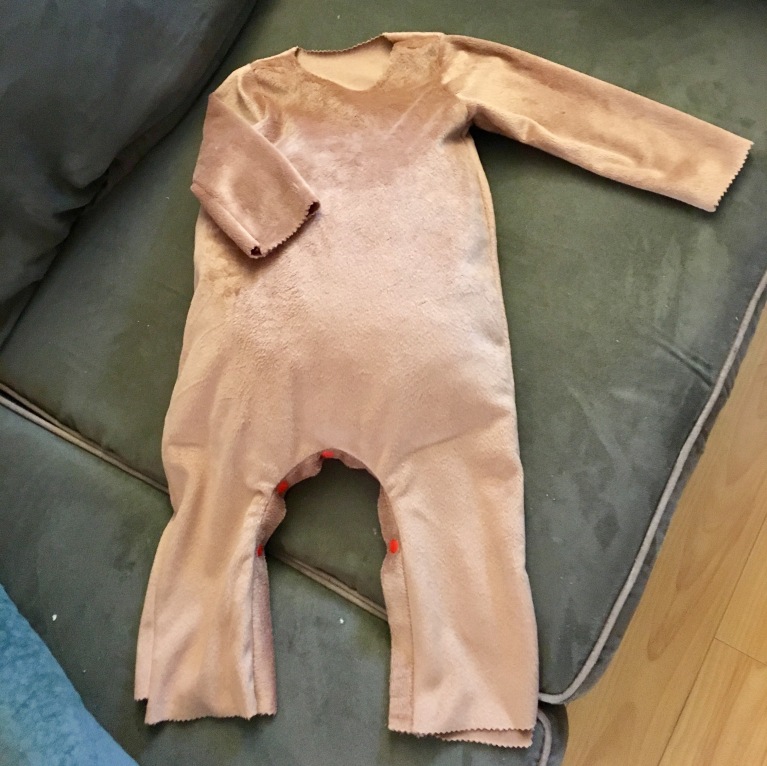 Then I focused on the hat & ears.

Hat: I measured the circumference of the hoodie (22″) and the height I want the hat (8.5″ to be safe). Divide the circumference by 4 and add seam allownace. I drew in a letter paper a triangle 6.5″ on the bottom and the top was 8.5″. Three felt pieces for the hat were stretching it. I had to sew together scraps to make the forth piece to the hat.

Ears: I had no idea what size the ears would be. Since I only had 2 pink felt sheets and I need a double layer because they were so thin, I just cut the 2 sheets in half and cut a tear drop as big as I could fit. Then cut the same size in minky fabric. Sew right sides together and turn out.

I had to hack the hoodie because it was too open. I sewed a 1/2″ casing along the rim, cut to holes on either side near neck line and fed a brown 1/2 satin ribbon through with a safety pin for a quick fitted hood. It will be tied in a bow and tucked in so it doesn’t show.

Then the felt shoe covers in maroon. We bought 2 sheets and they needed to fit over size 12-18mo Robeez moccasins. I just pulled this out of my head. Just wrapped the felt around the shoe and started sewing and cutting and turning inside and out until it looked good. The hardest part was replicating the same thing on the other shoe. It’s the biggest challenge for me to do shoes because the NEED to be matching! My OCD on overdrive!  I think they came out decent. 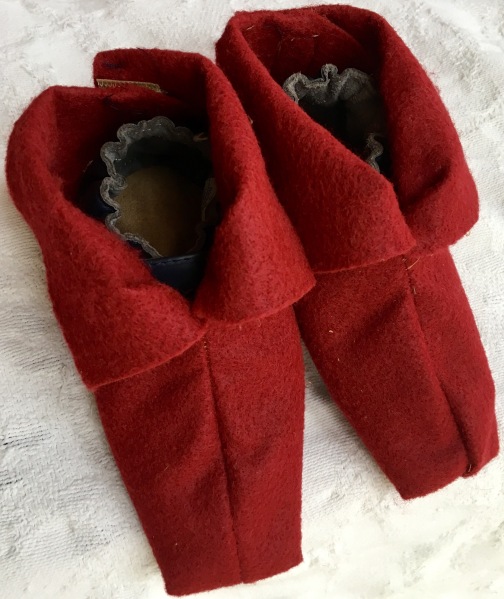 Quick added tail right before trick or treating. Brown felt 5/6″ and as long as you want it to be. I believe I cut 30″long. Sew together like a casing but in one end it will come to a point. I used floral wire from dollar store and fed it through to the top do the tail. I cut a hole in the body butt to feed the wire through and circle it around so it doesn’t like the little guy. I failed this next step but the felt should have been tacked to the wire near the butt so it wouldn’t slide off during the night. Yeah, that happened. 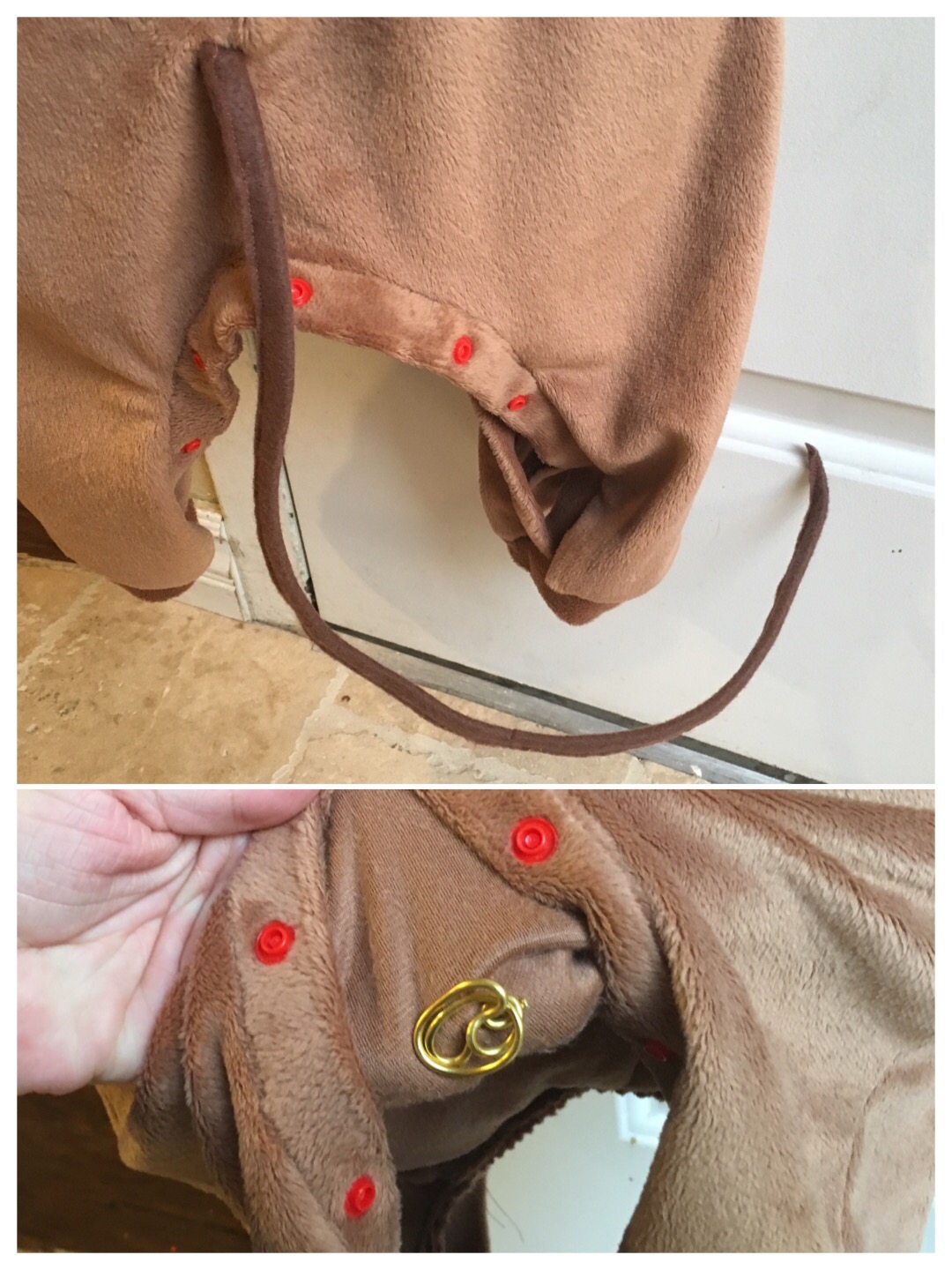 Updated: Here’s a picture of little Gus Gus (minus the shoes because they were lost while trick-or-treating

This site uses Akismet to reduce spam. Learn how your comment data is processed.